He’s not looking at me. What happened? 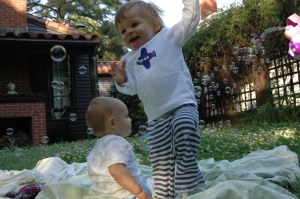 Right after Ben’s first birthday, around the first of May, we baby-sat his cousin, our nephew, for a week while my sister and her husband took a  vacation. Ben and his cousin are one month apart and we saw it as an opportunity to have the two, one year olds, spend time together and perhaps build a bond between them that would last a lifetime. Ben didn’t like it. His cousin didn’t like it either, he wanted mommy and daddy, not us. Almost immediately Ben became irritated at his cousin’s tearful cries for attention. His irritation soon became violent. He smacked his cousin every chance he got. We responded with putting Ben in time out for the first time in his young life. Needless to say Ben hated it but we figured he can’t be allowed to act this way, even though I mostly played it off as boys will be boys.

Over the next few weeks at home Ben kept up with his violent behavior, along with frequent temper tantrums with one or two lasting up to an hour. This was definitely out of character and extremely frustrating. We assumed that Ben was still angry about his cousin and having to share our attention. I assumed it was normal. What did I know?

Ben escalated his violence by biting his mom in anger. Again something we have yet to see in the first 12 months.

But this time, when he bit his mother, I got pretty angry, I’d had it and when I got him into time out, with him crying and trying to get loose, I sort of yelled at him to stop. Well I admit it, I did yell, I was furious that his behavior was becoming worse and I wanted it to stop. He didn’t, it got worse, he fought and screamed so much he broke a sweat and it continued for another 15-20 minutes as I held him silently but firmly. I tried to get his attention, tried to get him to look at me, to look into my eyes, and he wouldn’t. He just fought and had he had known the words I’m sure he would have been cussing up a storm.

“Look at me!” I said hoping to end the tantrum, turning him so his face was in front of mine, but his eyes stared off to the side. “Look at me Ben!” and he refused.

This sent a chill up my spine. Not that I knew anything about autism, it was because this just wasn’t like him. I remembered noticing his lack of eye contact when his cousin was with us for the week. I thought that was just him having his feelings hurt and being jealous. But this was different, I was suddenly aware that I was attempting to break him, break his will and instead it broke me. I sobbed uncontrollably, something is wrong, this isn’t worth it, just let him bite, do anything he wants. I left the room, I left him to work it out on his own. I left him to run away. A little later he came into my office where I was hiding my shame, my self doubt, my heartache. He came in and climbed up into my lap and loved me. I cried so hard it made my wife cry. In the 9 years we have been together she has only seen me in this state 3 times, once for reasons I don’t want you to know about, this time when I had the come to Jesus with myself and the last time months later when I knew Ben was autistic… or something.

After that night of biting and epiphany, I did notice often, all the time in fact, that Ben was refusing to make eye contact. Every night when we played right before bed, I would hold him so he couldn’t help but look at me and he wouldn’t. It got so it was kinda funny, his mom and I would joke that he was just like our cat Winnie, who also wouldn’t look us in the eye. Little did we know how serious it was and how long it would be before he would ever do it again.

This is an account of Ben’s regression into the autism spectrum.

Posted in How It Started