Prior to Ben being born his mom spent a lot of time researching how to deliver and raise a healthy baby. One of her concerns was the Hepatitis B vaccine being administered so early. She expressed those concerns with the doctor and was assured that the shot could be delayed with no problem.

When Ben was born we were all in heaven, laughing, crying, and attending to Erica who had just given a problem free, delivery to a healthy young boy. The nurses took Ben aside to an area in the room equipped to washing him down, suck snot out, weigh, measure and without our knowledge, inject a Hepatitis B vaccine into our perfectly pure newborn child.

I saw this out of the corner of my eye, needle poised ready to jab and I shouted, on camera, to STOP!

The nurse put down the needle, and I went over there and told her what arrangements we had make with the doctor prior to Ben’s birth.

When we discovered that Ben had autism we requested copies of his records with the pediatrician. In Ben’s records we found a note saying that Ben received his HepB vaccine the day he was born.

Hard to believe that we never knew. We said no, I yelled no, and made a big stink about it on the most joyous occasion of my life. And yet according to documental evidence, Ben received the vaccine anyway.

Upon further review of his records we find that he also received another HepB vaccine on June 23, 2006, This according to his official NC Department of Health and Human Services Lifetime Immunization Record.

This was the first betrayal of many by those trusted with the health and well-being of our son.

The reason to jab day old babies with the Hepatitis B vaccine, according to the CDC:

“Except for infants born to mothers with this infection, children are not at great risk of developing hepatitis B, but health-care workers, homosexuals, and intravenous drug users are. Attempts to vaccinate adults have been largely unsuccessful, however. It’s easier to reach children because school enrollment requires immunization.

Therefore, for lifelong protection, CDC has recommended that all infants be vaccinated before 15 months of age in three doses.”
http://www.fda.gov/fdac/reprints/vaccine.html

What are the risks from hepatitis B vaccine?

A vaccine, like any medicine, is capable of causing serious problems, such as severe allergic reactions. The risk of hepatitis B vaccine causing serious harm, or death, is extremely small.

Most people who get hepatitis B vaccine do not have any problems with it.

Some people should not get hepatitis B vaccine or should wait.

People should not get hepatitis B vaccine if they have ever had a life-threatening allergic reaction to baker’s yeast (the kind used for making bread) or to a previous dose of hepatitis B vaccine. How does someone know what allergies an hour old infant has prior to the shot?

People who are moderately or severely ill at the time the shot is scheduled should usually wait until they recover before getting hepatitis B vaccine.

Posted in The Birth, Vaccines 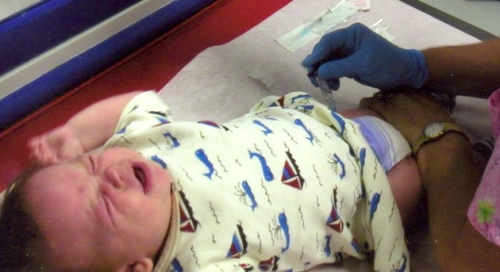 Ben had already experienced the jabs prior to ones he received on April 18th. He had quite a few, as do most children by the time they are a year old.

We had just finished his birthday celebration and I had traveled out of town on business when Ben and his mom went in for the shots.

Erica and I had talked about this day, I wouldn’t say we were scared, more like we were cautious. We had no idea about autism, but we knew vaccines were potentially dangerous to some children. Every parent hears horror stories and we had heard enough to be cautious. Erica went in with Ben, asked to speak to the doctor and the doctor gave her a good five minutes of his time to comfort all fears and anxieties. His words soothed Erica’s concerns and she signed the release allowing Ben to be injected with an MMRV, HepA, HIB and Prevnar, seven total vaccines.

Of course Ben screamed, he cried, he cried so much he vomited, he was upset for hours. Erica recalls this part of it in her journal.

Daddy left for a job and to help grandmammy and papa move into their house. You had just gotten your shots and we were on the floor in your bedroom and you were crying, wouldn’t stop, you’d been that way most of the time near the end of our day.   just picked you up and held you sitting on the floor and I asked you what’s wrong, still breathing hard, sucking your thumb, tears down your face. I said, “what’s wrong, use your words, tell me what”  You took your thumb out and pulled backwards looking at me you said, “me mesee daddy” put your thumb back in your mouth and placed your head down on my chest. You wanted to see daddy. I showed you his picture in the hallway and called him. You seemed better after that so we went to dinner. You are fabulous.

“Me Mesee daddy”, the last sentence he would say for nearly a year.

Things sort of started rolling downhill from there, little by little Mister Ben-gee-man started eroding into a different little boy. A week or so after this we babysat my nephew who is a month older than Ben. Ben immediately started acting out in violent and aggressive ways we hadn’t seen before.

It took 5 months before the seriousness of his developmental backslide became important enough to talk to the doctor about it. We made all kinds of excuses and just thought he would work out of it on his own.  When we did go in the doctors basically said he seemed to them a healthy little boy. They viewed my wife a little differently, “very preoccupied with Ben’s behavior” ,”mother overly concerned about his speech development” ,”concerned he is not responding to his name but upon evaluation he seems to hear quite normally”, “difficult to address all of mom’s concerns”, “appears to exhibit age appropriate behavior, a little on the hyperactive side”, ” prescribed amoxicillin”

Also in Ben’s chart is these notes from the doctor on Ben’s 9 month well visit:

Most of those observations of Ben’s development are true today, 24 months later, but not 6, 10 or 12 months later. Ben has just begun pointing once again and he still can’t say the “L” sound also he has just started imitating, in a call and response kind of way, once again.

In this video Ben is imitating Erica. He was 10 months old, 26 months later he can’t do it. Or won’t. Who knows.

“We surveyed over 9,000 boys in California and Oregon and found that vaccinated boys had a 155% greater chance of having a neurological disorder like ADHD or autism than unvaccinated boys.” – Generation Rescue

According to the study, boys represent approximately 80% of total cases of neurological disorders.

In October 2007, the Department of Defense issued the results of a study, there are at least 13,243 children and young adults diagnosed with an ASD among active duty military children. According to a 2005 study, there were 1,177,190 military dependent children (all ages) in that population giving a ratio of 1:89 (1:88 if not rounded) of medically-diagnosed children.
According to the DOD, 1 in 88 kids have been diagnosed with ASD.
The Brits are saying that the number is closer to 1 in 60. A study said to be released soon (no that’s not Ben in the picture) says the number of boys diagnosed with autism in the UK is 1 in 34.

One in 34 boys went missing in the UK.