Jenny McCarthy Damn Near Killed Me

In November I began listening to my wife about her concerns for Ben. She had been extremely depressed that no one is listening to her. Me in particular. I had one time told her the story of a dog that I raised and how he backslid, that it was nothing but rebellion, ego, establishing his spot in the household. Nothing a little time wouldn’t cure. Words she was hearing from the doctors.

Erica had earlier even asked to check Ben’s blood for some sort of leukemia, she knew something wasn’t right. I didn’t.

But I did listen to her on the porch that night as she sobbed that Ben was unable to do the things he once was doing. To her it seems deadly. She said, ” Ben is a shell, an empty shell, nothing inside, it’s like someone stole our son.”

So much had been going on with me and my personal issues I was unable to pay attention much less listen to her before.  I was in denial of what was going on with Ben. I needed to be, he was my hope.

But this was November 23rd. My mother had just asked me if Ben had hearing problems, we had spent Thanksgiving with the family and she noticed he stopped paying attention to his name being called. We also noticed how different he was in comparison to his cousin who was one month older and when asked where hippopotamus live he said, “In the jungle.” Ben was doing little more than grunting. It was hard not to notice a difference. Especially for Erica who never wanted to go back down there after that. I thought she was jealous. She was heart broken.

So there we were sitting on the porch, talking. Erica felt better, I felt worse. In fact I was nervous.

I went back inside and Googled hearing problems because I felt that was what was happening, I thought that when Ben had his 106/107 fever back in January that his hearing could have been damaged. But up popped autism, over and over. I was a psychology major  and what I knew about autism had to do with children who had to wear helmets because they would beat their heads on the floor. How could my son have autism?

But I kept at it.

On November 25th I sent out an email to a list of folks who were authorities in the field of autism.  The email stated as follows:

My son is 18 months old, family says to have his hearing tested. They say it over and over. We have been replying that he hears fine, when he wants to. We never thought twice about it because he USED TO always turn to us when he heard his name. USED TO….

There are a lot of things Ben, our son, used to do. He used to mimic us, he paid attention, he pointed and ate and stayed still. Now those things are rare. I just sat on the floor with him and repeatedly asked him “where’s daddy’s shoes?” This is something he could have pointed to or gone and picked up easily a year or so ago. Instead he acted as if he couldn’t hear me or worse acted as if I wasn’t even in the room.

At 3 months my wife Erica had Ben picking colors and shapes.
http://www.youtube.com/watch?v=BNwHPZOmlNc

By 10 months he had perfected it.
http://www.youtube.com/watch?v=zwLwkKSuaLg

You know how when someone shows you the big dipper in the sky and for the first time since staring up into the night’s randomly scattered twinkling lights you see it … you really see it?

I began reading about autism today and I’m scared. Scared my son may have traits that could be diagnosed as autism and scared because I don’t know what to do.

I live in North Carolina. Ben had a high fever Friday and we asked the doctor about his ears and hearing. She gave us “The CHAT (Checklist for Autism in Toddlers)”. We came home and looked at it and thought it couldn’t possibly be autism, even though a couple of questions sort of hung up in the back of our throats when we asked each other about them. Could this be anything, something to consider? Is our son autistic just because he doesn’t hear us sometimes, twirls around in circles, refuses to eat anything foreign or new, has regressed in language skills and learned behavior such as picking colors and shapes, searching and finding asked for items and delivering them?

We could use some direction in how to find a little help. I would like to find someone who will tell me my son is an incredibly bright child with a lot on his mind, with perfectly normal developmental skills and that I am a typical first time father suffering from internet hypochondria. But I’ll settle for someone to just show me which end is up. Right now I’m lost.

A couple of days later I went to Barnes and Nobles and bought nearly every book I could find on autism. One of those books was Jenny McCarthy’s book “Louder than Words.” I remembered she was a new mom and had written a book earlier about the joys of parenting. But this book had a subtitle, “A Mother’s Journey in Healing Autism” I wondered what that was about.

November 28th I stayed up half the night reading half the book. The half that had to do with diagnosis. It wrecked me. Tippie-toes, hinges, ceiling fans, spinning wheels, loss of language, seizures, eating habits, no eye contact. I knew she was talking about Ben. But I still held on. Not Ben.

I woke up early, I left the bedroom and checked on Ben. A lump swelled up in my throat. My eyes watered. I sniffed and checked the clock, I had to be on set in an hour. I had a half an hour drive. I needed a shower.

In the shower something snapped. I never experienced anything like it. I sobbed as if I just discovered Ben had been eaten by a devil. How could this be? Oh my God why?

I knew it was autism. I was crushed. After the shower I thought I got my composure back but I was wrong. Half way through the bedroom Erica woke to wish me well at work. Again I broke. I couldn’t tell her. All I could say was that I was upset about Ben, that the book upset me. She made me go in to kiss Ben before I left.

I cried the entire half hour and when I got to set it was hard not to leave. I knew any moment I might fall apart and make a blubbering fool of myself.

Erica surprised me with Ben at lunch, they had dropped in and it was truly a gift. I was able to finish out the day, turn in my invoice and head home ready to tackle the days that lay ahead. Of course having no idea what those days and night would be like.

Hell it was already more than I could take.

Jenny McCarthy damn near killed me. 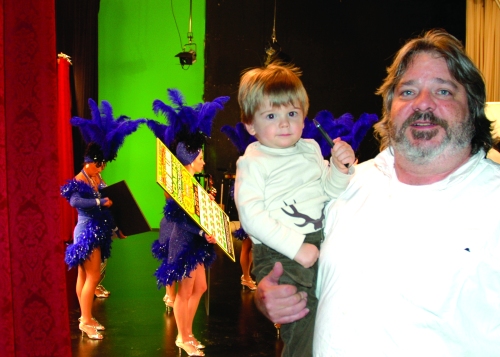 This entry was posted in Action, How It Started. Bookmark the permalink.

3 responses to “Jenny McCarthy Damn Near Killed Me”